Get to know the 7th Community Pharmacy Agreement

The 7th Community Pharmacy Agreement signed by the Commonwealth, the Pharmacy Guild of Australia and for the first time the Pharmaceutical Society of Australia, commenced on 1 July 2020, and be in place until 30 June 2025.

With three signatories (the Commonwealth, the Pharmacy Guild of Australia and the Pharmaceutical Society of Australia) the 7CPA is structured in three parts:

The first part of the agreement deals with matters related to the:

There are also a number of other arrangements in Part 1 including the intent to enhance the Closing the Gap – PBS Copayment Measure and to support future flexibility in the agreement through new or enhanced community pharmacy initiatives and incentives (e.g. particularly in areas such as aged care; mental health; e-prescribing). There is also a commitment to harmonisation of pharmacist vaccinations across the country.

The second part of the agreement deals with the professional practice of pharmacists in Australia. It recognizes the PSA as the national peak body for pharmacists in Australia and the custodian of the Code of Ethics, National Competency Standards, Professional Practice Standards, and practice guidelines governing professional practice. It also articulates the role of PSA in the design, implementation and evaluation of Community Pharmacy Programs.

The third part of the agreement deals largely with the governance arrangements and other general matters.

For best viewing experience of the tables below on a mobile we recommend using landscape mode.

Under the 7CPA, remuneration and funding of Approved Pharmacists and others in the pharmaceutical supply chain is estimated to be $25.3 billion of the term of the agreement. This comprises:

The following table sets out components of 7CPA remuneration and funding, and includes details of the contributions expected to be made by the Commonwealth and patients during the term of the agreement:

*Note: the price that patients pay for prescriptions that are not Commonwealth subsidised may be subject to discretionary discounting and the application of additional allowable fees by Approved Pharmacists. Accordingly, total remuneration for dispensing PBS medicines where the Commonwealth does not subsidise the cost to the patient of the medicine is in no way assured by the Commonwealth, including under clause 3 and Appendix B.

The components of the Commonwealth Price that apply under 7CPA are detailed below:

Throughout the term of the 7CPA, the Commonwealth will make available up to $1.2 billion in funding for patient focused professional pharmacy programs and services. For the first year of the agreement it is intended that the below Community Pharmacy Programs will continue and be largely unchanged.

It is the intention of the Commonwealth to:

In the 7CPA the Clinical Interventions and Pharmacy Trail Program have both ceased.

PSA will work with the Commonwealth in relation to the further development of the Code of Ethics and the continued maintenance of the Professional Practice Standards and relevant clinical guidelines. Implementation and support materials will be developed to support these standards an guidelines, including for new or enhanced Community Pharmacy Programs that arise throughout the term of the agreement.

The Governance of 7CPA is set out on Part 3 of the Agreement. This includes the establishment of two consultative committees:

The Commonwealth and the Guild will establish the CPCC to enable consultation by them in relation to matters between them in the Agreement.

The Terms of Reference for the CPCC are available in Appendix C of the Seventh Community Pharmacy Agreement and can be accessed here.

The Commonwealth and the Guild will establish the PSCC to enable wider consultation between the Department and the broader pharmacy sector. The Guild and PSA are standing members of the PSCC and the Department may invite other stakeholders as it considers appropriate.

The Terms of Reference for the PSCC are available here.

The Department of Health
The Pharmacy Guild 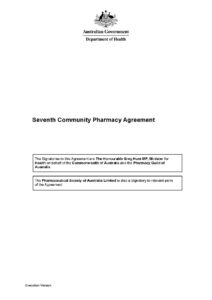 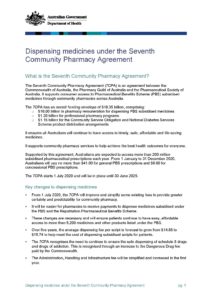 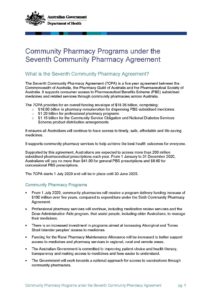 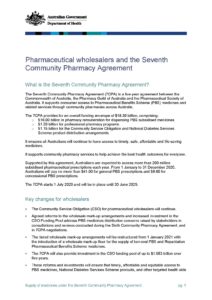 The Pharmaceutical Society of Australia (PSA) is the peak national professional pharmacy organisation, representing Australia's 32,000 pharmacists in all sectors and across all locations, working in or towards a career in pharmacy. Registered training organisation code: 122206 ABN:49 008 532 072 ACN:008 532 072