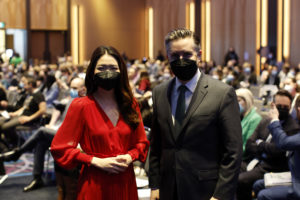 The Federal Minister for Health and Aged Care, the Hon. Mark Butler MP, has used his opening address at PSA22 to officially launch the Federal Government’s consultation paper on the Onsite Aged Care Pharmacist Program. He was joined by Assistant Minister for Mental Health and Suicide Prevention, and Rural and Regional Health, Emma McBride MP MPS.

The Pharmaceutical Society of Australia (PSA) National President Dr Fei Sim welcomes the announcement and thanks the Minister for his ongoing dedication to embedding pharmacists in residential aged care facilities.

“The Health Minister has this morning officially launched the Aged Care Engagement Hub, which will be used for consultation with the health sector on a variety of aged care programs, including the $345.7 million commitment to embed pharmacists in residential aged care facilities.

“The $345.7 million commitment is the largest spend in pharmacy outside of the Community Pharmacy Agreement, and will create up to 1500 opportunities for pharmacists over the next four years.

Minister Butler also acknowledged that PSA’s inclusion as a signatory in the 7th Community Pharmacy Agreement (CPA) was a positive step forward, and committed to PSA remaining a signatory in 8CPA, which is set to begin negotiations next year.

“PSA is the only professional body for pharmacists in all practice settings, and it is vital that we continue to be a signatory to the Community Pharmacy Agreements and ensure that the interests of the profession are recognised.

The Minister also spoke to his commitment to seeing health professionals, including pharmacists,  practising to top of scope, and entrenching the role of pharmacist immunisers.

“PSA is proud to have worked collaboratively with the Federal Government to roll out the THN program nationally, and ensure we can continue to save lives from severe opioid reactions.”

“Assistant Minister McBride, who has been a long time PSA member, also gave a passionate speech to the opening plenary, speaking to the hugely significant role of pharmacists and the importance of allowing us to practice to top of scope. We thank for her dedication to our profession.

“PSA is very grateful to Minister Butler and Assistant Minister McBride for taking the time to attend PSA22 and meet hundreds of pharmacists from around the country.

“We’re excited to give Australian pharmacists the opportunity to hear directly from the new Minister for Health on his government’s priorities for health and for the pharmacy sector.

“PSA sincerely thanks Minister Butler and Assistant Minister McBride for progressing the government’s commitment to embedding pharmacists in residential aged care facilities and looks forward to working with the government to ensure the program is successfully rolled out,” Dr Sim concluded.

The Pharmaceutical Society of Australia is the professional organisation of Australian pharmacists. PSA is the only government-recognised peak national body for pharmacists, representing all of the pharmacy profession in Australia.

The Pharmaceutical Society of Australia (PSA) is the peak national professional pharmacy organisation, representing Australia's 32,000 pharmacists in all sectors and across all locations, working in or towards a career in pharmacy. Registered training organisation code: 122206 ABN:49 008 532 072 ACN:008 532 072